The mandolin’s history can be traced at least as far back as the 12th century in Europe, but the instrument continues to be a vital ingredient of some of the most inventive aspects of American acoustic music.

Mandolins were all the rage in late-19th-century America, and countless clubs and orchestras existed that brought the instrument to the forefront of pop culture. As evidenced by turn-of-the-century photographs, it also appeared in early traditional string bands. The older mandolins were of the Neapolitan or “taterbug” shape—that is, they had deep, rounded backs. Around 1910, instrument maker Orville Gibson introduced a revolutionary new form, a mandolin with a flatter back, its body closer to the width of a fiddle. In the next generation, Lloyd Loar, another now-legendary instrument maker, popularized a model of mandolin that had f-holes—narrow, scroll-shaped sound holes in the top, like a violin has, rather than the rounded central sound hole of earlier styles. The instruments usually have eight strings—four pairs, which are tuned like the four strings of a violin. That affinity with violins made the mandolin a natural addition to string band music, in which the fiddle reigned. 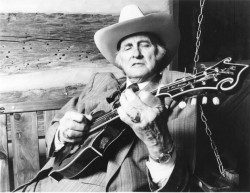 The mandolin in bluegrass music

The mandolin is the smallest of the core instruments in a bluegrass band, but its size belies its importance. Because Bill Monroe was a mandolinist and the leader of his Blue Grass Boys, the instrument became a lead voice in the emerging genre that Monroe built and pioneered. Previously, the mandolin had been an important part of the music of some well-known groups—particularly “brother duets” like Bill and Charlie Monroe, and Hickory’s Blue Sky Boys—but in a larger band the fiddle was traditionally the most prominent voice. Due to Monroe’s influence, however, the mandolin became so dominant that, even today, some bluegrass bands don’t even feature fiddlers.

The mandolin in old-time music 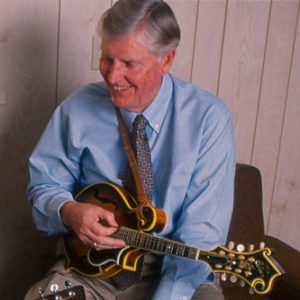 In old-time music, the mandolin is more likely to be played as a rhythm instrument, supporting a fiddle-led ensemble. Verlen Clifton of Mount Airy is one of the most widely-admired old-time mandolinists of our times.  As a member of the legendary Surry County string band the Camp Creek Boys, he was a rhythmic dynamo, propelling the music  forward. Half a century later, Clifton is still an outstanding mandolinist, living and playing music in the Mount Airy region. In 1996, Verlen Clifton was recognized by the state of North Carolina with the North Carolina Heritage Award.