Due in large part to its popularity during the folk music revival of the 1950s – 1970s, the mountain dulcimer, also called lap dulcimer, is one of the instruments most readily associated with Southern Appalachia. Millions were introduced to the instrument’s gentle sound by Kentuckian Jean Ritchie and by Frank Proffitt (1913 – 1965) of Watauga County, North Carolina. 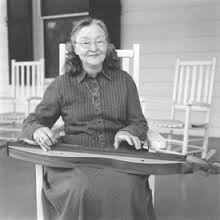 The mountain dulcimer is usually played across one’s lap, noting or chording with the left hand and strumming the three or four strings with the right. (It’s a different instrument from the hammered dulcimer, a many-stringed instrument played with delicate wooden mallets.) Compared to an instrument like the fiddle, for example, which takes a long time to learn, the most basic techniques of the mountain dulcimer are picked up quickly. As with any instrument, an advanced mastery requires time and dedication; but even a beginner can play a simple melody or accompany singing with the dulcimer.

The dulcimer revival that took place within the folk revival had the effect of reinvigorating a longstanding tradition of dulcimer-building in the North Carolina mountains. Members of the Glenn, Presnell, Sturgill, and Hicks families, among others, built instruments for eager customers around the world. The tradition is carried on nowadays by craftsmen who include Clifford Glenn, Rick Ward, members of the Trantham Family, and Ben Seymour.

Many music events in the Blue Ridge and Great Smoky Mountains feature dulcimer concerts or instruction in building and playing the instrument.