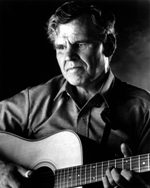 If he had been the only North Carolinian ever to pick up the instrument, Arthel “Doc” Watson alone could have assured the legacy of his home state in the history of guitar music. Arguably the most influential folk guitarist of all time, the Watauga County native pioneered a style of flat-picking that combined elements of old-time, bluegrass, blues, and even rockabilly music. Though Watson’s playing paid homage to earlier guitar legends such as Merle Travis, Mississippi John Hurt, and Maybelle Carter, it was nevertheless instantly recognizable as his own. With his brilliantly articulated picking, Watson gave new voice to music that ranged from traditional fiddle tunes to old jazz standards. He received numerous honors before his passing in 2012, which included the National Endowment for the Arts’ National Heritage Fellowship, and the National Medal of Arts.

Even independently of the towering legacy of Doc Watson, musicians from the North Carolina mountains and foothills have made exceptional contributions to the evolution of American guitar music. Many legendary guitarists have called this region home.

Etta Baker, a native of the Caldwell County hills, was a beloved artist in the Piedmont blues tradition. Baker came from a musical family that included her father Boone Reid, sister Cora Phillips, and cousin Elizabeth “Babe” Reid, among other talented relatives. In 1991 Etta Baker received the National Heritage Fellowship.

Among the many great bluegrass guitarists from North Carolina, two in particular have played major parts in developing the instrument’s role in bluegrass music.

The Round Peak region between Mount Airy, North Carolina, and Galax, Virginia, has for generations been a hotbed of old-time string band music, and among the ranks of great Round Peak musicians are several widely admired guitarists. Paul Sutphin (1918 – 2004) was a member of the Camp Creek Boys and the Smokey Valley Boys, the two most influential Round Peak string bands of their day. Carrying on the legacy of guitar today are Round Peak living legends Frank Bode, Chester McMillian, and Mac Snow as well as a whole new generation of young pickers who can be heard competing in contests throughout the region.