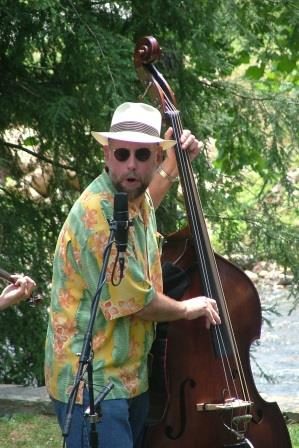 In traditional mountain music, if you hear a bass playing, it’s almost certainly an upright string bass. In some early string bands, a century or more ago, the bass line might be provided by bowing a cello or blowing a jug; and as six-string guitars became more common in the mountains, “bass runs” on the lower strings became a fundamental element of string band music. But in bluegrass and old-time music nowadays, most basses are of the upright variety, the largest member of the violin family.

By plucking (or, very occasionally, bowing) the strings, the bass player provides a sonic undergirding to a band’s sound. In a performance setting he or she might also have other duties. In many early bluegrass bands, for example, the bass player was also a comedian. Today bass players often emcee, carrying the stage patter while the other musicians retune the instruments with strings that are more numerous and/or more temperamental. Ted White of Asheville’s Whitewater Bluegrass Company even calls square dance sets while playing his bass.

White is an example of the excellent bass players in North Carolina’s Blue Ridge Mountains. Others you are likely to see in concerts and at festivals include:

The artists named above all play the upright string bass. There are also some great bass guitar players in this area: for example, Lenoir blues musician Clyde Ferguson, Jr., Ryan Harris of the Harris Brothers, and Hunter Welch of the Welch Family Singers.