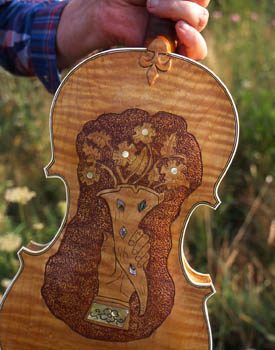 The fiddle is the heart of traditional mountain music—so much so that any old-time instrumental tune, regardless of what instrument it’s played on, is called a “fiddle tune.”

One of the questions fiddlers are most often asked is, “What’s the difference between a fiddle and a violin?” The answer is that they’re actually the same instrument, but the kind of music you play determines what you call it. To classical and some jazz musicians, it’s a violin; to traditional musicians, it’s a fiddle.

A European instrument, the violin was popular in the areas where many early Appalachian settlers or their forebears came from—particularly the British Isles and Germany. It was also a natural choice for people on the move, like the early settlers. It’s an awful lot easier to carry a violin than, say, a piano; and, because it produces both melody and, through bowing technique, a strong rhythmic punch, a lone fiddler can supply all the music needed to power a community dance.

Like so many American art forms, fiddling represents a marriage of European and African influences. American fiddling often features highly syncopated bowing, a rhythmic element that points to strong African American influence. (Nowhere is this more evident than around Mount Airy, where many of the great old-time fiddlers are masters of intricate, propulsive syncopation.)

The North Carolina mountains and foothills have been home to great fiddlers for centuries. In old-time music, North Carolinians are numbered among the legends.

North Carolina has its share of bluegrass fiddle legends too, including three influential veterans of Bill Monroe’s Blue Grass Boys.

There are also many long-running fiddlers’ conventions in the North Carolina mountains, where fiddlers—and other musicians—gather to play with old and new friends and compete for prestigious titles.