For many people the banjo is the instrument most readily associated with the Appalachian mountains, a symbol for the region’s musical traditions. In fact, the banjo reflects the South’s cultural richness overall, with a heritage that blends traditions of the new world and the old, and of black, white, and Native American people.

Early history of the banjo 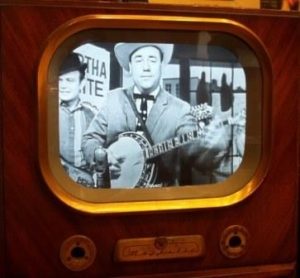 The ancestor of the modern-day banjo was brought to America by enslaved Africans. Even today musicians in the Senegambian region of West Africa play an instrument called the akonting, a gourd-bodied string instrument played in a style very much like American clawhammer banjo. Like the akonting, the earliest banjos in America would have had gourd bodies, or pots, covered with animal hide. At least as early as the 18th century African Americans played banjos with a short fifth string, which functions as a “drone” string—a feature that the African akonting shares.

In time, white Southerners developed an interest in the banjo, too. Even before the Civil War, the banjo—often paired with the fiddle—was popular with white as well as black musicians in the lowland South and in the mountainous frontier regions of Appalachia. The instrument became still more prevalent as black and white minstrel shows, which often featured banjo music, became a popular entertainment.

Types of banjos and techniques

The form of the banjo has changed over the generations, though the overall concept is generally the same as that of the early African instruments. Though the tradition of making gourd banjos has never fully disappeared (in fact, it has undergone something of a revival in recent years), the gourd body was largely replaced by a wooden ring or pot, with a hide covering, or “head.” Luthier Henry Dobson is credited with adding frets to the banjo neck in the 1870s. In the 1880s he also developed the tone ring, a metal ring under the head that amplifies the sound of the strings, and the resonator, a disc-shaped cover that encloses the back of the pot, also for amplification. Today both the resonator banjo and the open-back (no resonator) banjos are popular. The resonator banjo is often called a bluegrass banjo, due to its importance in that style of music, while the open-back banjo is sometimes called an old-time banjo. (Some old-time musicians do play resonator banjos, however.)

Historical accounts tell that the early African American banjoists played in a down-stroke style, pushing down on the four lower strings with the back of the fingernail, usually of the index finger, and sounding the short fifth string with the thumb. This was the precursor to what is known today as clawhammer playing. (In West Africa, akonting players use much the same technique.) Banjo strings can also be plucked with an inward motion, a technique that appears in both old-time and bluegrass music. Three-finger banjo playing uses both the index and middle finger, as well as the thumb, to pluck the strings. The Carolina three-finger tradition ultimately led to the creation of the bluegrass banjo style.

Musicians from the North Carolinian mountains and piedmont have played essential roles in the history of the banjo.

Enthusiasm for the banjo has never let up in the North Carolina mountains. Representing the tradition today are such outstanding old-time banjoists as Riley Baugus, Amanda Spencer, and Travis Stuart, and bluegrass legends Raymond Fairchild and Marc Pruett—and many, many more.

There is no shortage of banjo-centric events in the mountains every year, all of which welcome visitors.

Visit the Down The Road on the Blue Ridge Music Trails Podcast Library to hear more about the African Roots of the Banjo and explore many bluegrass and old-time music stories, performers, and traditions across the mountain and foothills counties of Western North Carolina.