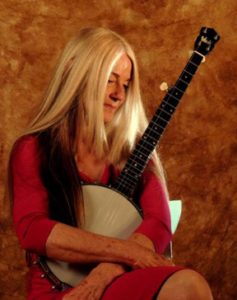 National Heritage Fellow Sheila Kay Adams is the inheritor of a family ballad tradition that goes back to the days of early settlement in North Carolina.

I was a child of the sixties—the whole nine yards. I listened to Steppenwolf and Led Zeppelin and the Rolling Stones and the Beatles. But when I was at college I started to realize how important tradition is. I also realized that nobody else was learning it.

I spent a lot of time at my granny’s house, and there was music there all the time. Granny was also a really neat storyteller, but it was the singing that was the most important. They called the way they did it “round robins.” They would sing an old love song and then they would turn around and sing a song like “Angel Band” or “We’ll Camp a Little While in the Wilderness.”

I remember one time Granny and I went to a round robin. I was seventeen, and I had driven all the older ladies to the singing. After they got into this big circle, it was announced that one of the singers had recently passed away. I was out in the lobby smoking cigarettes, and Granny sent for me. So I sat down next to her, and she leaned over and put her hand on my knee. She told me that she had been looking around at all the people in the circle, and she had realized how old they were, and she had thought, “If we don’t get some young folks to singing these old love songs, it’s all gonna be gone! When these folks here are gone, every song they know will be gone too, unless somebody young learns them.” She appointed me.

My family has been singing those old love songs, as best we can figure, for seven generations. I’m the eighth generation, and my daughter is the ninth. I can’t think of any other family tradition that can beat it, unless it might be a recipe. I think that makes those old folks pretty special. They just loved to sing.

Visit the Down The Road on the Blue Ridge Music Trails Podcast Library hear more about Sheila Kay Adams and explore many bluegrass and old-time music stories, performers, and traditions across the mountain and foothills counties of Western North Carolina.