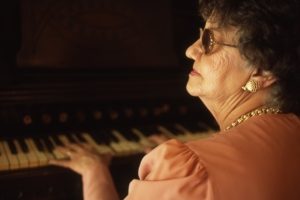 Christine Horton is an old-time piano and keyboard player. She is the daughter of traditional musicians who taught her to play when she was a child. She lives in the community of Ferguson in Wilkes County.

My daddy was a musician, and my granddaddy was the champion fiddle player of this whole community. His name was Rufus Horton. My daddy played the guitar some and the fiddle. I hate to brag on him, but he played the smoothest violin that you’ve ever heard in your life. His name was W. E. Horton. He’d play “Over the Waves” waltz and a lot of fast tunes, and you could just feel yourself dancing to hear him play such smooth music. My father, my mother, and I all played, and we would all sing together. Had we had some money and could have gone to Nashville or somewhere like that, we could have, maybe, perhaps, been something like the Carter Family.

I played mainly piano. I didn’t play the fiddle; I was too sorry to learn. My mother could sing from a page of music that she’d never seen before. My mama tried to teach me to read notes, too, but I said, “You’re talking monkey stuff to me. I’m not gonna fool with that.” But I would watch her play a song, and then I could go back and play it myself.

Music, years ago, was a form of entertainment at home. We would go to people’s houses to play music, and they would all come to our house. Boys would bring their girlfriends and get me to play music for them. They’d give me candy to play for ‘em. One man who ran a hosiery mill would bring me sacks of socks when I would play. Oh, I had red, blue, and every color of socks you can imagine, coming and going. Entertainment back then was what you could make for yourself, years ago when there wasn’t any electricity and there wasn’t any television.