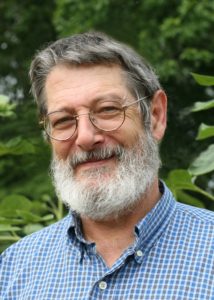 Jan Davidson is the executive director of the John C. Campbell Folk School at Brasstown and a musician and writer. A native of nearby Murphy, North Carolina, he’s been director of the Folk School since 1992. Jan has a Ph.D. in folklore and museum studies.

I grew up in downtown Murphy in an old house that was built by my grandmother’s father, my great-granddaddy Robert Alexander Akin. When I was a kid, there was a church on one side of it and a funeral home next to that, and then on the other side and across the street were filling stations. Those were the musical centers in towns like Murphy. In fact, there were four filling stations within an easy walk of our house, and they all played music. People came and played different types of music in each one. It was great. It was good music.

When I first started listening in the 1950s, most of the guys tried to play like Flatt and Scruggs, but there were still a few old people around who did something that was obviously different from bluegrass. Once, I remember my father said he was going to see an old guy who had a banjo, a World War I vet named Caleb Mashburn. He’d had some health troubles, and his banjo didn’t have but about three strings on it, so I took him some new strings and he started playing things like “Mamma’s Darling Child,” which most people call “Soldier’s Joy,” using a two-finger style. I worried a number of elderly people back then, asking them to play a tune for me.

When I was about thirteen, my daddy took me to Asheville to see a music show, and Frank Proffitt was in it. I really liked him. So I wrote him a fan letter, the only one I ever wrote in my life. And he answered it. I told him I really wanted to get a banjo just like he was playing. “I’m going to get a job,” I wrote. I was prepared to make the ultimate sacrifice to get a banjo.