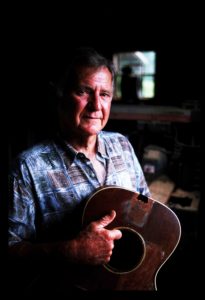 Herb Key has played music for most of his life. He has also spent more than thirty years making, repairing, and restoring musical instruments. He currently performs with the Elkville String Band, a group that was originally formed as the house band for the Wilkes Playmakers’ annual production of Tom Dooley: A Wilkes County Legend.

I was born a long time ago—1936, actually. I was born here in Wilkes County, up near Moravian Falls at a little community around Cub Creek Church. We were members of the church there. We walked to church back then. Lots of people did. I was born in a house up there that my brother still lives in. My dad built that house. My dad was a carpenter. He built it before he really got to be that good, but he did pretty well. And he remodeled it over the years. I helped him do a lot of that. That’s where I got my start in woodworking.

When I was little my mother had a guitar she played a little bit, and my dad could play. But he didn’t really want me to play music. You know back then we had folks that wouldn’t work, and Dad knew a lot of musicians that wouldn’t work—Charlie Poole, for instance, was one of ‘em. I became interested in music pretty early on. My grandmother had one of those windup Victrolas, and she had some records that I recall. One in particular was Mother Maybelle Carter playing “The Wildwood Flower.” I was five, six, maybe seven at the time, and I’d sit on the floor, and my grandmother would put that record on and play it for me. I was so fascinated by the sound of that guitar. She wouldn’t let me wind up the Victrola myself, she was afraid I’d break the spring. So she’d wind it up as many times as I wanted to hear it, and play it for me. I was just fascinated! We had the radio we listened to, and the Victrola, and that was about the only connection we had to music. I had an uncle who played, and he’d come around occasionally and show me a few things. So that’s how I got started trying to play music.

There was a local guy here in the late sixties named Jack Williams. He’s passed on now. He was a local repairman, and I got to hearing about him. I heard he’d built a guitar. At that point I didn’t think anybody could build a guitar. That was just beyond comprehension—to me. He was primarily a fiddle repairman and a banjo repairman. So I decided I’d build a banjo, ‘cause that’s what he was building, mostly.  He helped me.

By the late sixties, I had heard about Wayne Henderson, and I met him at a fiddlers’ convention. And we struck off as friends right off the bat. Wayne was a real likeable guy and still is. He was building guitars then, he’d built just a few. We became friends, and I got to picking with him more. And that’s how I got connected in with instrument repairing and building.

I first heard Doc Watson back in the sixties before he got really popular. I didn’t know him personally back then. I got to see him at fiddlers’ conventions here and there, and got to hear him on the radio. But then I went to his house and we became pretty good friends. He used to come to the shop right much. He liked honey and I keep bees, so I took him a quart of honey every once in a while. You know, I admired Doc’s music abilities and his determination and outlook on life. I have a brother who’s blind, so I understand a little of what he faced. He was handicapped but he never let that stop him or bother him.