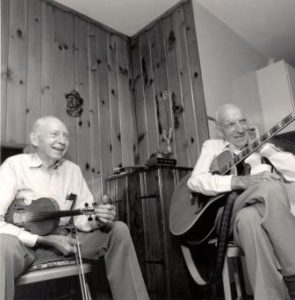 Active for much of the twentieth century, the band was known for its smooth sound, blending the brothers’ favorite elements of traditional string band music with the pop and Western music that they learned listening to a battery-powered radio on the family farm in Haywood County. A typical set might include old square dance favorites, Bob Wills-influenced Texas swing, Tin Pan Alley chestnuts, and breezy 1920s jazz hits of their childhood.

Many fine mountain musicians played with the Smathers band over the course of its long career. Luke’s wife Bea and grand-nephew Charles Gidney played with the band, as did other great local artists like Quay Smathers. Some of the younger members have gone on to become pillars of the area music scene today: David Holt, Laura Boosinger, and Madison County’s Hilary Dirlam. These and other musicians frequently played informally at Luke and Bea’s home in Canton, and “Bea’s Kitchen” came to be a favorite area gathering-place, a symbol of the warmth and hospitality of North Carolina mountain musicians.