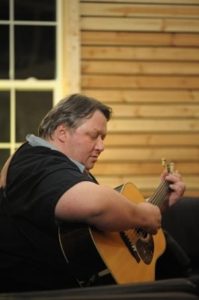 Brothers Jens and Uwe Krüger are natives of Germany who grew up in Switzerland. The Krüger Brothers started singing and playing instruments at a very young age. Music was a critically important part of life for them as children, growing up in post-World War II Europe. The brothers first came to the Blue Ridge in 1997. They live in Wilkes County.

My mother was a kindergarten teacher, and she had a song for everything. We sang a lot at home. We mainly sang old German folk songs. She was from Germany—East Prussia. My dad was from Northern Germany. For them, music was a way of keeping our culture alive. In Switzerland, [German music] was not very highly regarded. As Germans in Switzerland, we were guest workers—much like the Mexicans are here today. It was hard for us. We wanted to sing those German songs because they meant a lot to our family.

When you’re a boy of eight, nine, or ten years old, you think Western! The American West was a dream world for us, a place where everything was better—the outlaws, the cowboys, and all that. So, we learned to play American folk music. The melodies sounded really like German music to us, but with different words. One of the first songs I learned was “Tom Dooley”—the Kingston Trio version.

The first time my brother heard “Foggy Mountain Breakdown,” he went nuts! He started spinning around like a Tasmanian Devil! All around the living room—honestly! He said, “That’s what I want to do!” He was playing a tenor banjo then, so he put a thumb-screw on it and added a fifth string so he could play bluegrass.

At night, when I was supposed to be asleep, I’d listen to Voice of America or the American Armed Forces Network. They played everything, but mainly country music. The GIs who were over in Germany mostly came from the South, so they played a lot of bluegrass. I remember the first time I heard “Run, Ol’ Molly, Run” [“Molly and Tenbrooks”]. I will never forget that! It was the best-sounding thing ever.

We found a new home in American folk music. The music from the South was the most accessible to us because, I believe, that people all over the world, when they live in the mountains, share certain traits in their lives. And good folk music tells about those things. When I first discovered Doc Watson, that’s exactly what happened. He talked about life the way I would talk about life. And that’s the way my dad would talk about life. He was straightforward.

America has something that looks very familiar to me, especially here in the Appalachian Mountains. When I first came here in 1997, it was like I had touched the ground for the very first time in my life. I felt at home.

Visit the Down The Road on the Blue Ridge Music Trails Podcast Library to hear more about how the The Krugers Followed Music from Switzerland and explore many bluegrass and old-time music stories, performers, and traditions across the mountain and foothills counties of Western North Carolina.