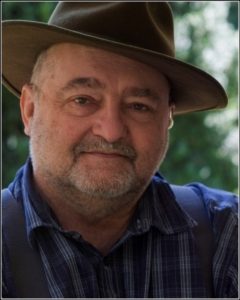 As a child, Bobby McMillon developed an avid interest in the traditional songs that had been handed down in his family. He is one of the leading living authorities on the subject of traditional mountain music. He lives in Yancey County.

As a child, I listened to the stories that the family told. I grew up listening to the scary stories and the witch tales and things that our family knew about. I just loved to listen to ‘em. My grandfather had a Victrola talking machine, and he had a lot of old records. About the time I was twelve, I began to realize that some of the songs that my granddaddy had on records were similar to the songs that were being sung out and about in the community. When I was between 12 and 14, I started learning the songs that people I knew were singing. I was thirteen or fourteen when I became aware of the recorded and written folklore collections, and I began to read everything I could about them. I slowly began to learn what all this was about.

Toward the end of the 1960s my father went up to an electronics store and bought me a tape recorder. That summer I began to record everything that was being said or sung. It was about that time, also, that I met a man from Watauga County named Rolf Ellison. Rolf, he had a banjo and he got to playing a few songs. He started out with one called “Down Yonder,” and then he took the picks off his finger and started playing in a different style. He kept the picks off his fingers and just hooked his forefinger up on the second string and went to playing in a modal key.

And he proceeded to sing “Lord Daniel.” I knew I had hit the jackpot then! That was just exactly what I was looking for.