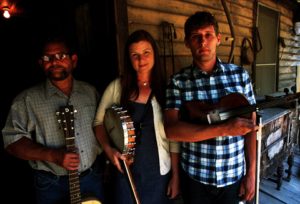 Chester McMillian has played with all the great musicians who lived in an area of North Carolina in Surry County called Round Peak—Tommy Jarrell, Kyle Creed, Fred Cockerham, and many others. His son, Nick McMillian, learned as a child to play the traditional Round Peak style of fiddle from his father and grandfather, Dix Freeman. Nick’s longtime girlfriend, Kelley Breiding, now rounds out their band, Backstep, with her masterful playing of the old-time fretless banjo—a banjo that once belonged to Dix Freeman.

Chester: I was brought up in a family of musicians on both sides—my mama’s side and my daddy’s side. My daddy played old-time banjo. On Mama’s side we had fiddle players and banjo players. Back then every little community had their own musicians. I grew up in the times when we didn’t have televisions and very few people had radios, so you made your own music. WPAQ was the first radio station I ever listened to. Daddy went somewhere and bought a radio. It had a battery; I think maybe he put a car battery on it or something. Anyway, we listened to WPAQ, and they played music all the time. I remember playing on there myself in about 1956, on one of the remote programs they had. I remember Benton Flippen being on there. I think he was one of the first ones on WPAQ. That was the only thing we had to listen to back then. But, first thing, we made our own music.

Nick: To me, what we play is a natural evolution of the Round Peak style of music. It was passed on to me from my grandfather, just like he learned it when he was a kid. I really try not to copy anybody. I try to do my own thing. Tommy Jarrell play just like his father. He learned from him and then he took up the style and made It his own.

Kelley: I feel like if you try to copy some other person’s music exactly, it’s like you antiquify it. It’s like you’re making it into a museum piece. You’re reenacting an exact style of music, and that’s making it a dead thing. It’s like you’re putting it away and saying, “Well, this is over.” But if you just let it live and play a style in the way it naturally goes, but not in an exact way, you keep it fresh and you keep it alive.