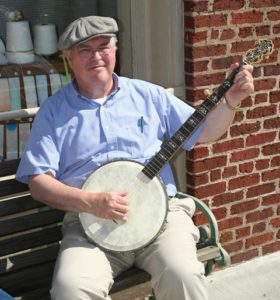 When I was in the eighth grade—I was about eleven years old then—my dad brought home from the mountains of Franklin County, Virginia, which is where he was born, a stack of old 78 rpm records, records that his uncles had made. One uncle was Posey Rorer, a fiddler, and the other one, an uncle by marriage, was Charlie Poole, a banjo player and singer. Charlie was married to Posey’s sister, who was my dad’s aunt. So Dad brought home that stack of old 78s, and I would lie on my stomach on the floor and play them on my sister’s little record player. I would play those records while I was on the floor doing my homework. That may be why I didn’t do so well in some of my classes.

I was listening to things like “Leaving Home” and “Flying Clouds” and those tunes. That was in 1957, 1958. So I would lie on the floor and listen, and I was just captivated! That sound! It’s hard to explain. It just kind of grabbed me. I was really taken with the sound I heard on those 78s.

My dad encouraged my brother and myself to learn that music. My dad would take us to see local musicians, and we’d play some with them. There was a service station there in Spray where they had music on Tuesday nights—a Sunoco service station—and he’d take my brother and me down there, and we’d watch those musicians play. Then there were some other musicians who played at a country store in Draper on Friday nights. It was that kind of exposure that I had to the music.

Once my dad took us to see Bascom Lamar Lunsford. That was in the spring of 1964. I have a picture of my brother and me sitting on Bascom Lamar Lunsford’s front steps with Lunsford and his wife. In the picture I have my little banjo, my brother has his guitar, and Lunsford has his banjo and his wife has a guitar. Lunsford was really the first person who ever taught me a chord by name.

I would love to see more young people take an interest in this “homegrown” music of ours—the traditional, rural music that’s so much a part of our heritage. It’s Americana. It’s great music. This music is so authentic, it’s so real, and it’s a true reflection of the people who worked in the mills, in the tobacco fields, in the coal mines—you just couldn’t ask for anything more genuine.