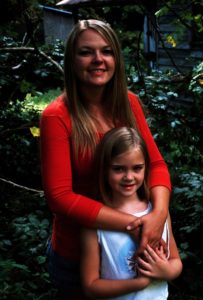 Donna Ray Norton is part of a younger generation of North Carolina ballad singers. She was born and spent her formative years in Sodom in Madison County, a community that has produced many traditional ballad singers. She now lives in Weaverville in Buncombe County.

When I started singing I was already seventeen years old, but [ballad singing] has been around me my whole life. My mom would go over to my cousin Sheila Kay Adams’ house. She had kids that were my age. We would play and do our thing, but we could always hear them singing. The adults would go in the kitchen, and we’d hide outside the door and listen. I knew the songs in my head, but I never actually learned to sing them until I was a senior in high school.

The first ballad I actually sat down and learned was “Young Emily.” Back in the old days everybody lived around one another, and that’s how people learned. They did “knee to knee.” If you were sitting in front of me and I was trying to teach you a ballad, I would sing a verse and then you would sing it back to me. Then I would sing the next verse and you would sing the first verse and the second verse and so on. Now it’s hard, because my next-door neighbor is not my cousin or my aunt. You have to resort to a new way in order to learn something that’s old. Now it’s just play, pause, and rewind.

I am really proud of who I am and where I come from. I really hope that my kids will carry on the same tradition. A lot of times it’s hard to make it work because of your work schedule or your life schedule, you know, when you’ve got two kids running around. But if it’s something that you love, you’ve got to do it.