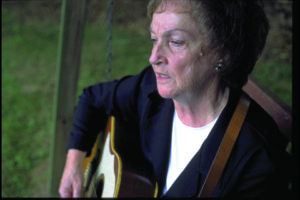 Dorothy Hess lives in a beautifully manicured mountain cottage that’s surrounded by a yard full of carefully maintained flower beds. She continues to sing and play the dozens of love songs she learned as a child from her mother.

I was born in Lebanon, Virginia, in 1929. I was born with a bone deformity, and I guess being able to sing and strum on my guitar kind of compensated for that. I spent most of my first seventeen years in the crippled children’s hospital in Richmond, Virginia. When I’d get to come home, Mother would sing for me. I loved to hear the music. She would sing all these folk songs, real sad things. I loved them. When I’d go back to the hospital, I would try all of those songs out. I knew them right down pat. I’d lay there and sing all the time. That was just my thing.

Mom and Dad always tried to get me to make a recording when I was just a youngster. They said I was really good. And I would just yodel as hard as I could. I’d have the nurses piled around my bed saying, “Do that again!” But getting out in front of the public was another story. I had been teased so much at school—the other children gave me a hard time.

Mother played the banjo. My sister played guitar. They were on the radio in Bristol, Virginia. They had a Saturday night jamboree there in a huge auditorium, and it was always packed full of people. My mom and my sister, they had these old, old outfits with black bonnets and black dresses, and they went as “Lizie and Kate.” Sort of comedians, you know. They really took the shows! Mama played banjo, clawhammer style. My younger sister took up the banjo. My older sister taught me to play the guitar. One day she said, “Do you want to learn to play?” And I said, “Yes, I do, but I don’t think I can do it.” But I did. I sang on the radio. I was just a little thing, and I was in my braces. The crowd loved it.

Now I’ve started going to the fiddlers’ conventions, singing all of Mama’s songs that she had taught me. I love to sing around in the background at the fiddlers’ conventions after the stage part is over, and entertain people. You really meet a lot of people that way. And they love the songs. I want this music to be passed on to the younger generation. And I’m seeing more of it now than I ever have. It pleases me. I don’t want it to be forgotten. I want what I knew in my younger days to be carried on. I want my songs to be passed on to someone who will pick up on them and carry them on.