The high-energy sound of bluegrass has long thrived in the Blue Ridge Mountains. For musicians and longtime fans, Western North Carolina is hallowed ground. For the new listener, it’s an exciting and welcoming place to explore bluegrass music. 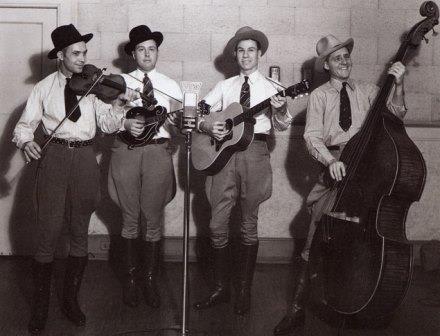 As traditional styles of music go, bluegrass is a youngster. The first notes sounded over the radios in mountain kitchens and parlors around 1939, as Bill Monroe and his band the Blue Grass Boys introduced audiences to their innovative approach to string band music. On February 2, 1939, the Blue Grass Boys played on Asheville’s WWNC, in what many regard as the band’s first broadcast.

To people in the Carolina mountains who were raised on what we now call old-time music, there was a lot about the new style that sounded like home. Some of the familiar elements of an old-time string band were there: fiddle and guitar, plus the mandolin (Monroe’s instrument) and upright bass. The band’s performances included fiddle tunes that one might hear at any Saturday-night square dance, old familiar heart songs about mother and home, and multi-part harmony singing drawn from gospel styles of the day. Even Monroe’s own voice and mandolin were already known to many listeners, from his earlier recordings and broadcasts with his brother Charlie.

But bluegrass introduced new sounds, too. For one thing, then as now, the musicians took “breaks.” That is, they traded turns playing the instrumental lead—a departure from the unison approach of much old-time string band music. And those instrumental breaks were often highly improvisational. While improvisation in old-time music is subtle, bluegrass makes greater flights of fancy, an approach often compared to the creative spirit of jazz.

Bill Monroe, a Kentuckian, was the father of bluegrass music, but it took a village heavily populated with North Carolinians to raise the baby. The Blue Grass Boys’ first fiddler was Art Wooten, a native of Sparta in Alleghany County. Monroe was a tremendous admirer of good fiddling, and it speaks volumes about Wooten’s talent that he was the first to be hired for that role. Jim Shumate also fiddled with the Blue Grass Boys, hired after Monroe admired his playing on the radio from Shumate’s hometown of Hickory. 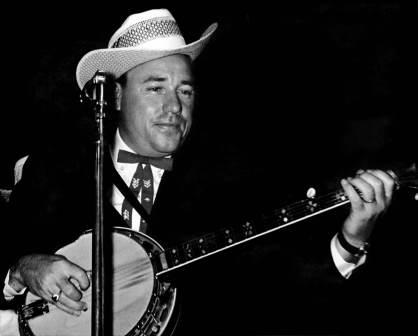 Think for a moment about bluegrass music and its essential sound. What is the first instrument that jumps out at you? If it’s the banjo, you can thank Earl Scruggs. The Cleveland County native joined the Blue Grass Boys in 1945, and many music aficionados believe that’s when the classic bluegrass sound was fully realized. Scruggs played an ultra-syncopated three-finger style of banjo, a combination of his own innovation and the style of the region where he grew up. In time, Scruggs would become the most famous bluegrass musician of his day—perhaps of any day. He and partner Lester Flatt formed their own band, the Foggy Mountain Boys, in 1948. They would become household names far beyond the borders of the South playing “The Ballad of Jed Clampett” on The Beverly Hillbillies. Scruggs’ original “Foggy Mountain Breakdown” became so well known after the 1967 release of the movie Bonnie and Clyde that for many it still represents the quintessential sound of bluegrass.

Many more North Carolinians would join the ranks of the bluegrass pioneers. Among them was George Shuffler, a native of Valdese in Burke County who played with the Stanley Brothers’ Clinch Mountain Boys for nearly 20 years. His sweet signature cross-picked guitar playing can be heard on many of their most beloved recordings.

North Carolina is at least as well represented today among the leading lights of bluegrass as it was sixty years ago. Fiddler Bobby Hicks has had a long and storied career, which began with his being recruited by Bill Monroe to join the Blue Grass Boys in 1954. 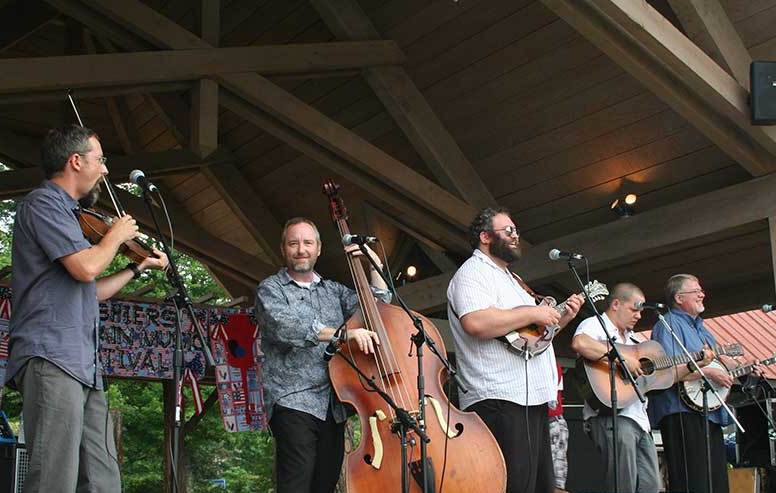 Balsam Range, featuring a stellar lineup of musicians from Haywood County, has topped the bluegrass charts repeatedly since the release of their first album in 2007. Asheville-born guitarist Bryan Sutton shared a Grammy with Doc Watson for their duet recording of “Whiskey Before Breakfast,” and he has toured with Ricky Skaggs and Kentucky Thunder, Hot Rize, and other legendary groups. The Steep Canyon Rangers, based in Asheville and Brevard, tour with banjo-playing actor and comedian Steve Martin, and have appeared on such TV shows as The Late Show With David Letterman and The Colbert Report—introducing a nationwide TV audience to bluegrass music, just as Flatt & Scruggs did half a century ago.

Visit the Down The Road on the Blue Ridge Music Trails Podcast Library to hear more about the bluegrass music tradition and explore many bluegrass and old-time music stories, performers, and traditions across the mountain and foothills counties of Western North Carolina.