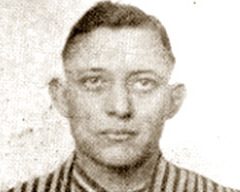 On New Year’s Eve in 1930, one of North Carolina’s most famous outlaws was killed in a barrage of gunfire. Otto Wood was born in the Dellaplane community of Wilkes County. He spent most of his short life traveling across the country as a bootlegger, a bandit, and a fugitive. As the song would later say, “He loved the women, he hated the law and he just wouldn’t take nobody’s jaw.”

Wood committed his first crime (stealing a bicycle) as a teenager. He did time in the Old Wilkes County jail, also the temporary home of another North Carolina music legend, Tom Dooley. In 1923, Otto shot and killed a pawn broker in Greensboro named A. W. Kaplan. Allegedly, the argument arose when Kaplan sold a watch Wood had pawned containing a photograph of his beloved mother. Though he was sentenced to thirty years in prison, Wood managed to break out of the North Carolina State Prison four times, quite a feat considering he had a lame foot and lost a hand in a hunting accident as a teenager.

A Cautionary Note About Coronavirus Disease
Scroll to top