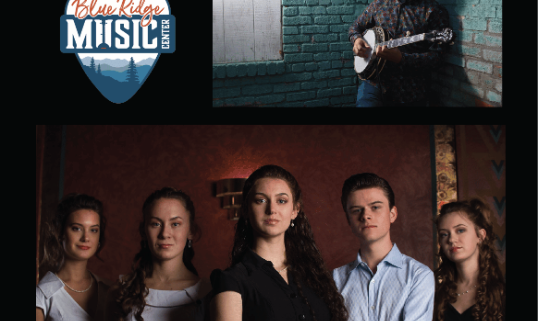 The Yadkin Arts Council announces their 2023 Willingham Theater Season and Special Events. The Sounds of the Mountain Series in partnership with the Blue Ridge Music Center. This schedule is filled with a curated collection of performing arts and entertainment featuring an array of live music, musicals and plays, fundraisers, and family programming. The Willingham Theater is located within the Yadkin Cultural Arts Center at 226 East Main Street, Yadkinville, NC 27055.

For the Burnett Sisters Band, it’s all about family. Growing up playing music together in North Carolina, the sisters’ sound is focused around breathtaking vocal harmonies, expertly complemented by tight instrumental arrangements and a bona fide love of the traditional songs they play.

Trajan “Tray” Wellington’s love for music bloomed at an early age. From learning traditional bluegrass to studying genres such as jazz, progressive bluegrass, blues, rock, and more, Tray has gone on to play with some of the most accomplished musicians in the world.

Rissi Palmer’s gift lies in reaching across all musical boundaries. While she started out making her mark in country music, she is equally at home in R&B, bringing the entire spectrum of popular music to bear on what she calls “Southern Soul.”

Singer/songwriter Laurelyn Dossett lives and writes in the North Carolina piedmont, and her songs reflect the stories of the region. Dossett is a frequent performer at regional music festivals such as MerleFest and the North Carolina Folk Festival.

ShadowGrass can trace its roots to the forefathers of bluegrass. While fully embracing the traditions of the past, this is a band that is comfortable stepping outside the bounds of traditional music while maintaining traditional instrumentation.

Goin’ Across the Mountain™