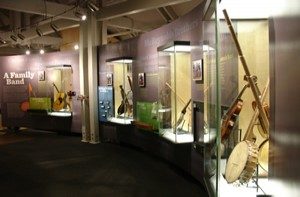 Surrounding the Blue Ridge Music Center, one finds many variations of the endemic fiddle and banjo music tradition of Virginia and North Carolina. This music can be traced to the meeting of the African banjo and the European fiddle before our nation was created. Here also are found older ballads and religious music that reach deeply into the American past.

The Roots of American Music exhibition tells the compelling story of the region’s rich musical heritage through interactive displays, family and performers’ histories, musical recordings, and instruments. From the old-time string bands, ballad singing, and dancing that define the traditional music of Southwest Virginia, Northwest North Carolina and Tennessee, to blues influences and growth of bluegrass, the exhibit traces the musical origins of the roots-based folk and Americana music of today.

The exhibition explores how the blending of the sounds of the banjo and fiddle on the Appalachian frontier led to virtually all forms of American music. Visitors can trace the many stages in the evolution of the five string banjo since its arrival in America with enslaved Africans. In contrast, the fiddle brought with European immigrants underwent very few changes.

While you are here, try your hand at crafting song lyrics. Mix your own version of mountain music. You can even hear personal stories of how traditional has influenced generations of Blue Ridge families. There are also oral history audio programs of those who collected the music of the mountains in the past. Learn how the recording industry and radio popularized and changed mountain music starting in the 1920s.

Entrance to the exhibition is free and open during regular business hours and later on concert nights. National Park Service rangers also offer additional educational programs throughout the year. Ask for details at the front desk.