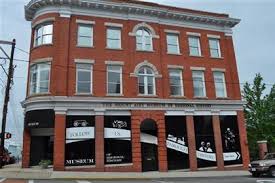 With four floors and five newly renovated permanent and changing exhibit galleries (and two more in the works), the Mount Airy Museum of Regional History offers and exciting, engaging, dynamic and interactive exploration of the region’s history, culture and art.

A self-guided tour starts at the new Main Street storefront shop that is fast acquiring a reputation for showcasing high quality and unique regionally produced arts, products and literature. The Museum can be an exciting and educational experience.
The first gallery, opened in September of 2021, focuses on telling the story of the Native American pre-history and later settlement of the “Hollows” from the Colonial era through the antebellum via the Great Wagon Road with historic vignettes including a Saura dwelling, a pioneer’s log cabin, a blacksmith and wheelwright shop, and a rural general store.

The adjacent gallery, completed in July of 2022, tells the stories of the intersection between the region’s agricultural heritage and the societal changes brought on by industrialization during the Victorian Era. Also found on the first floor is a train depot and a 70-foot scale model railroad that takes you from Sanford, North Carolina to Kibler Valley in Virginia and a changing exhibits gallery with new offerings several times each year. The new permanent exhibits on the first floor explore themes of migration/immigration, STEM in the historical context, and the biographies of some of the countless people who have shaped the region into what it is today.

The Second floor of the museum houses the “Hometown Heroes” gallery that highlights the achievements of area people who have made a notable impact on the wider world including performers, captains of industry, philanthropists, military service members and more. The museum is also the official home to the Donna Fargo and Easter Brother’s collections showcasing the area’s strong ties to the music industry. Also found on the second floor is the Award Winning local sports history exhibit.
The museum’s third floor houses the Adelaide Bunker Sink Community Gallery, a dedicated program space and event space as well as newly renovated (July 2022) children’s hand’s on history gallery where kids can play, explore, learn, and have fun on with play stations and devices that are themed to coordinate with the museum’s permanent exhibits.

Last, but certainly not least, is the museum’s basement and the Hilton Wright Fire History Exhibit (Opened July 2017). This space chronicles the fire history of the region including the multiple downtown conflagrations, Flat Rock School fire and subsequent creation one of the state’s earliest and most extensive network of volunteer fire departments, interactive components and the first three fire engines from Mount Airy dating back to 1917.

In addition to the exhibits, the museum hosts regular programs and workshops and is home to the Historic Mount Airy Ghost Tours. Stay and hour—stay the day—the choice is yours, but a memorable visit awaits you at the Mount Airy Museum of Regional History!